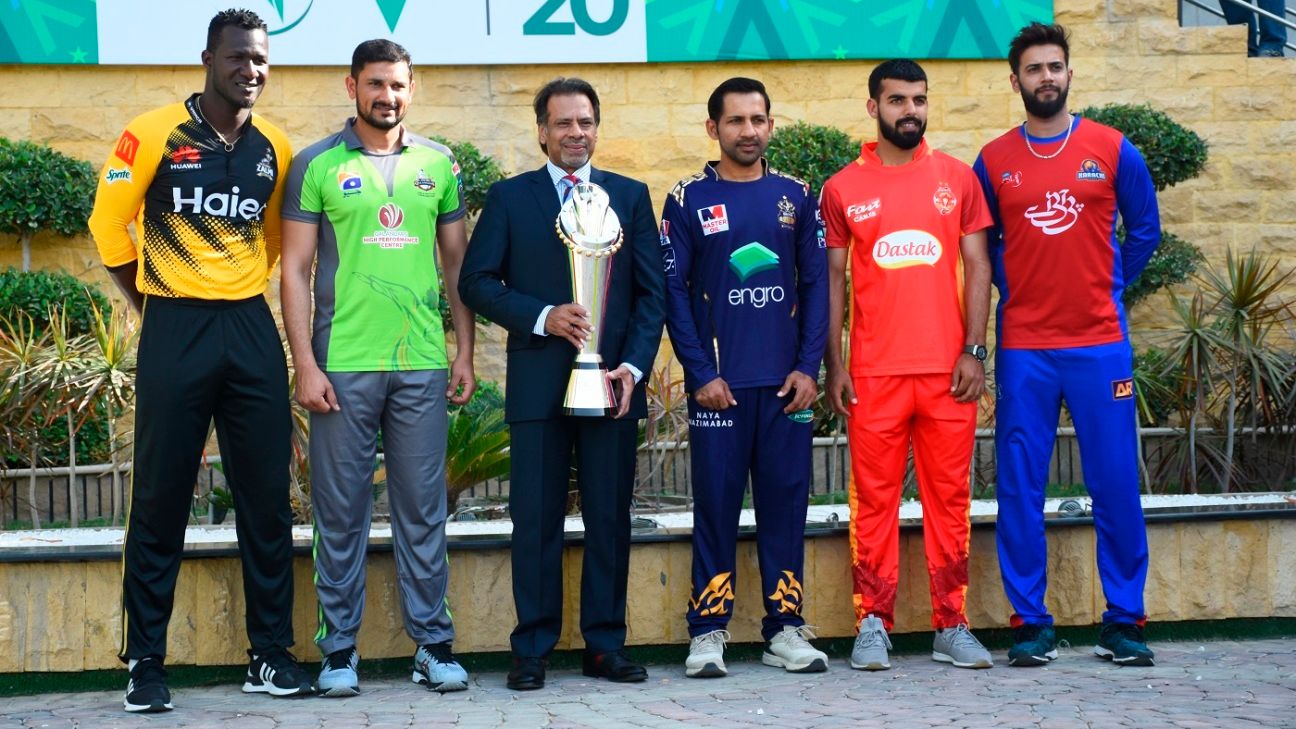 Wasim Khan has said that the PCB’s “first point of call” is to ensure that the knockout stages of the 2020 PSL can be played at some point, following speculation that Multan Sultans might be awarded the trophy after topping the group stage.Speaking to ESPNcricinfo’s Stump Mic podcast, Wasim, the PCB’s chief executive, said that the fifth edition of the competition had been a “resounding success” and that the board has identified two possible windows for the knockout stages of the competition to be played later in the year, after the tournament was postponed due to the coronavirus pandemic.Meanwhile, Multan Sultans co-owner Ali Khan Tareen tweeted that it would be “ridiculous” for his franchise to be handed the trophy, and that the knockouts should be rescheduled for later in the year “so our local players get more opportunities to shine”.Last week, franchise owners seemed divided upon the issue, with Multan’s other co-owner Alamgir Tareen urging the PSL not to reschedule the unplayed fixtures but stakeholders in the other semi-finalists – Lahore Qalandars, Karachi Kings and Peshawar Zalmi – hoping a window could be found for the games to be played.”We’re currently looking at when we can reschedule the remaining matches to be played, and we’re confident we’ll get those done at the back end of the year, subject to obviously all things going well,” Wasim said.”From our point of view, the first point of call is to try and ensure that we get the remaining matches played. There are two small windows that we have identified at the back end of the year.”Ideally, you probably need no more than three or four days. So we’re just working that out. We’re going to be taking the views of the franchise owners into it, get their views on it, look at what potential format we can play.”If you remember, initially it was based on qualifiers, eliminators and then the final, and then we moved to semi-finals and a final based on the shorter window because of safety reasons around the coronavirus. We are looking at that, and we are confident that we can get that done.”Elsewhere, domestic competitions have been abandoned early, with the team topping the table awarded the trophy: New South Wales were declared Sheffield Shield winners, Weillington were given the Plunket Shield title, while Lions and Dolphins were named as first-class and one-day winners in South Africa.But Wasim pushed back against the idea that Multan, who topped the group stage with 14 points, should be given the trophy.”There’s no fun, right, in just handing it over to Multan Sultans at the moment? Although they’ll probably be pushing for that. Our first point of call is to make that happen.”If it can’t happen then as other leagues around the world have done is to then declare a winner. Them [Multan] being on top, that would probably be the case.”While Alamgir Tareen had pushed back against the idea of playing a knockout stage, saying he did not consider it to be “practical”, Ali Khan Tareen tweeted that he had “differing views on the way forward” to his co-owner.”Finishing at No.1 means we were the most dominant/consistent team, but it doesn’t mean we won,” he tweeted. “It would be ridiculous for the PCB to just give us the trophy. All 4 teams have the same chance of winning. Trophies should be won, not given.”And as I’ve always said, trophies are not important. Helping players develop, giving them a platform and watching them excel is so much more rewarding. So that’s why I want the remaining games to be played later in the year so our local players get more opportunities to shine.”While the destination of the trophy remains unclear, Wasim said that the PSL’s first full season in Pakistan had been a “massive, massive success”.”For the first time we’d brought the whole of the PSL back to Pakistan. It was a huge undertaking to do that, and to see close to 600,000 fans turn up at four venues across 26 matches… for us, that was a huge success. The PCB staff worked day and night to make that happen.”Despite the fact we had to postpone at the semi-final stage, we felt it was a massive, massive success, particularly based off the feedback we’ve had from round the world.”

Cricketing heads meet to plot way out of crisis