Australia’s Test captain Tim Paine has rejected his predecessor Michael Clarke’s contention that some members of the national team had been “too scared” to take on Virat Kohli too aggressively in their 2018-19 encounters for fear of what it would do to potentially lucrative IPL deals.With India scheduled to tour Australia for a Test series next summer, Clarke had reckoned that the prospect of endangering contracts in the IPL had played on the minds of some of Paine’s team as they lost the series 2-1 in the absence of the banned Steven Smith and David Warner. The return of that pair to the Australian side has made a marked difference over the past 12 months, pushing them up to a clear second place on the World Test Championship table.Paine, who is seen in the Amazon documentary, The Test, counselling his team not to give Kohli too much aggression to feed off during the series, said that beyond tactical attempts to keep India’s captain quiet there were no other motivations involved as Clarke had suggested.”I certainly didn’t notice too many people being that nice to Virat or not trying to get him out or anything like that,” Paine told ESPNcricinfo. “I thought everyone who had the ball in their hand or when we were batting were trying their absolute best to win the game for Australia. I’m not sure who was going easy on him; we certainly had a thing where we didn’t want to provoke any fight with him because we think that’s when he plays at his best.”Who knows what will happen this series and, as we saw in the documentary, there was still quite a lot of heat in some of those games. I certainly wasn’t holding back, but again the IPL’s not a huge draw for me at the moment, so I had nothing to lose. But anytime our guys go out and play a Test match for Australia, they’ll be giving their absolute all and I’m pretty sure they’re not thinking about an IPL contract when they’re running in, bowling to Virat.”Back in November 2018, Clarke had previously critiqued the national team’s approach in the wake of the Newlands scandal and Cricket Australia’s cultural review, declaring that they “won’t win s**t” by “worrying about being liked”, a notion that was also shut down by Paine. However, he has admitted that one of the Australian team’s struggles in the first year after Newlands had been finding a way to play hard cricket without feeling hemmed in by expectations of better behaviour. In recent series, against England, Pakistan and New Zealand, Paine underscored that a balance has been achieved.”What you say on the field is irrelevant 99% of the time,” Paine said. “Sometimes you can get a little inside someone’s head or something like that, but if you’re not batting well and not bowling well, all the talk in the world doesn’t mean anything. There’s no doubt our first focus is on executing our skill and being as good as we can possibly be in that area and then sometimes things happen on a cricket field and you’ve got to go in, you’ve got to change your tack, or you’ve got to have a few words.”As we’ve seen the last 12 or 18 months, we still do that, we still stick up for each other, we still fight as hard as any Australian team, but we’ve probably just had to move with the times and I’ve been really proud of the way we’ve played out cricket.”Irrespective of how they play, Paine admitted that the current state of uncertainty over when international cricket can resume is playing on his mind. Having returned to the Test team in 2017 and thrust into the captaincy within a few months due to Newlands, he said there was frustration at knowing when the Test Championship, in particular, can restart: the final is currently scheduled for mid-2021 at Lord’s.”It is a very difficult time. You have things like the Test Championship that are a huge goal for our team and certainly a huge part of my individual goals and where I want to go. So the unknown of that is challenging at the moment,” Paine said. “But just staying in the moment, who knows what’s going to happen, hopefully we get our country and the world back to how it was and we can all live our lives normally again.”Part of that was being back out on the cricket fields and football fields, which is an important part of Australian life, that sort of sporting endeavour. It’s difficult to put into words because you’re disappointed that what you set out to achieve as a team might not be happening now, but at the same time it’s a pretty small issue compared to what a lot of people are going through in the world.”As for the likelihood that cricket may need to be played for some time in empty stadiums, Paine said that this was a secondary concern. “Fans are still going to be watching on TV and who knows what’s going to happen. We might have crowds, we might not, it’s not something we can control,” he said. “We can control how we act and how we represent our country and our fans, and in the last 12 months in particular I think our whole group – from our players to our staff – have done an unbelievably good job of that, so we want to continue that whether there’s crowds or not.” 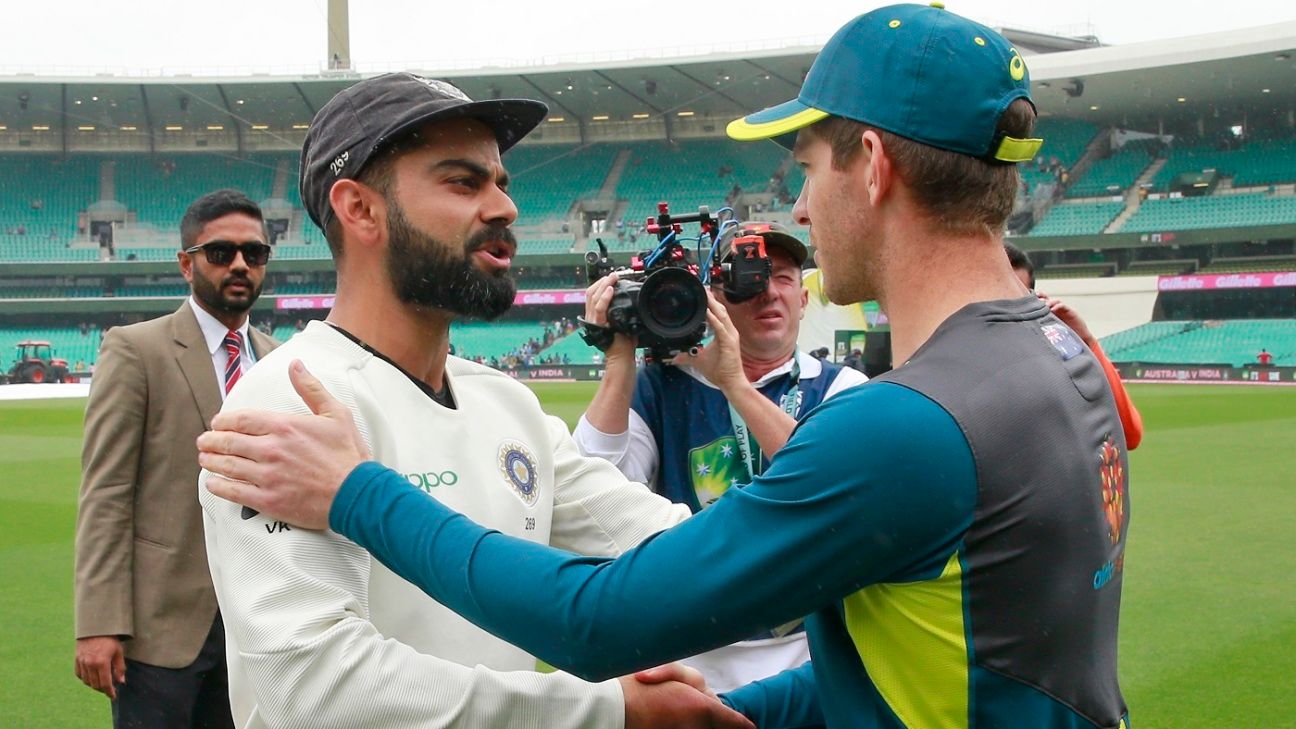 Ben Stokes named as Wisden’s leading cricketer in the world