Eoin Morgan has been making “the best out of a bad situation”, enforced by the coronavirus pandemic, spending time with his three-week-old baby. Had things been normal, Morgan would not have been at home, he would have been part of the Kolkata Knight Riders squad in the IPL.Reflecting on a remarkable year for him as England’s white-ball captain, Morgan said that the 2019 World Cup final had lifted the profile of cricket in England in unprecedented fashion.”I think the journey that we went on is probably the most exciting. In 2015, the embarrassing nature in which we were bundled out of that World Cup and the journey we embarked on to try and change the brand of cricket that we played with a new group of extremely talented players over the course of four years – it’s brilliant,” Morgan told www.kkr.in.”The more experience that I’ve got, I find myself batting in that middle order and hopefully being there at the end. It’s probably one of the better skills that I do have and probably over the last two years, it’s been at its best.”I started playing reverse-sweep when I first came to London as a 16-year old and signed up at Middlesex. Playing at Lord’s, the boundaries were very short square of the wicket and they are really long straight. When I played in the first team as a 17-18 year old, trying to clear the long straight boundary at Lord’s was very difficult for me. So I started playing a lot more sweeps just because they were more effective at our home ground. I sort of drilled the reverse-sweep and swept for as long as I could. The reverse-sweep has been one of my favourite shots because it’s been so effective over the years.”
“It sort of culminated in last year’s World Cup. The final was the most dramatic game of cricket and the best game of cricket that probably has ever been played which contributes to the hype of it. But I think one of the great things about it was on the day of that great game of cricket was, it’s always now associated with the longest ever Wimbledon final that was epic as well. It helped us in growing cricket outside of the normal bubble that we’re already in to a different audience, and for us at home it has lifted the profile of the game like we’ve never seen.”Straight after the World cup win was the Ashes series which was absolutely amazing to watch. Australia thoroughly deserved to win it [the series was drawn with Australia retaining the urn] but again, the dramatic nature in which the whole series unfolded really did attract the whole country and sort of galvanised one of our biggest rivalries in sport. It was fascinating to watch and I thought it was a great year for us, cricket-wise.”Morgan was also looking forward to a second stint with Knight Riders, having played for the franchise from 2011 to 2013. He will reunite with good friend Brendon McCullum, the two having first built a friendship when they were team-mates at Knight Riders. McCullum is now the head coach of the franchise.”I think his contribution not only to New Zealand cricket but to world cricket really took the front in 2015 with their campaign – throughout the 2015 World Cup,” Morgan said. “They really did, I suppose, transform the fate of a nation and the hope of a nation in the way that they played. They played aggressive, positive cricket but also in a way that wasn’t in your face the whole time. It was really good to watch, it created a huge amount of attraction and I think majority of the time actually the way that they play and the manner that they play overlooks the skill level that they produce.”And I think Baz is the reason for that turnaround. I think he has had a huge input in the way they’ve played and in all formats as well not just white ball. I suppose it makes that move to KKR all the more sweet when he’s head coach. I think if we see any similarities in the impact that he’s had as a player and as a captain on his coaching, the impact will be monumental. I really do think he’s changed the landscape of cricket and the attitude of the way people play.”Morgan was also looking forward to learning from Dinesh Karthik, the Knight Riders captain.”While I’m here to help, I also want to learn as much as I can from him. There are a lot of dynamics about being a captain when you’re playing in India that I don’t know about, I’ll be picking his brain the whole time,” Morgan said. “I’ll naturally be myself and try to give as much as I can just like the rest of the international players. But it’s going to be fascinating to see how and when we get to play and how the competition lines up. Because everybody is going to come out of isolation extremely excited, rearing to go, batting, bowling, fielding the whole lot.” 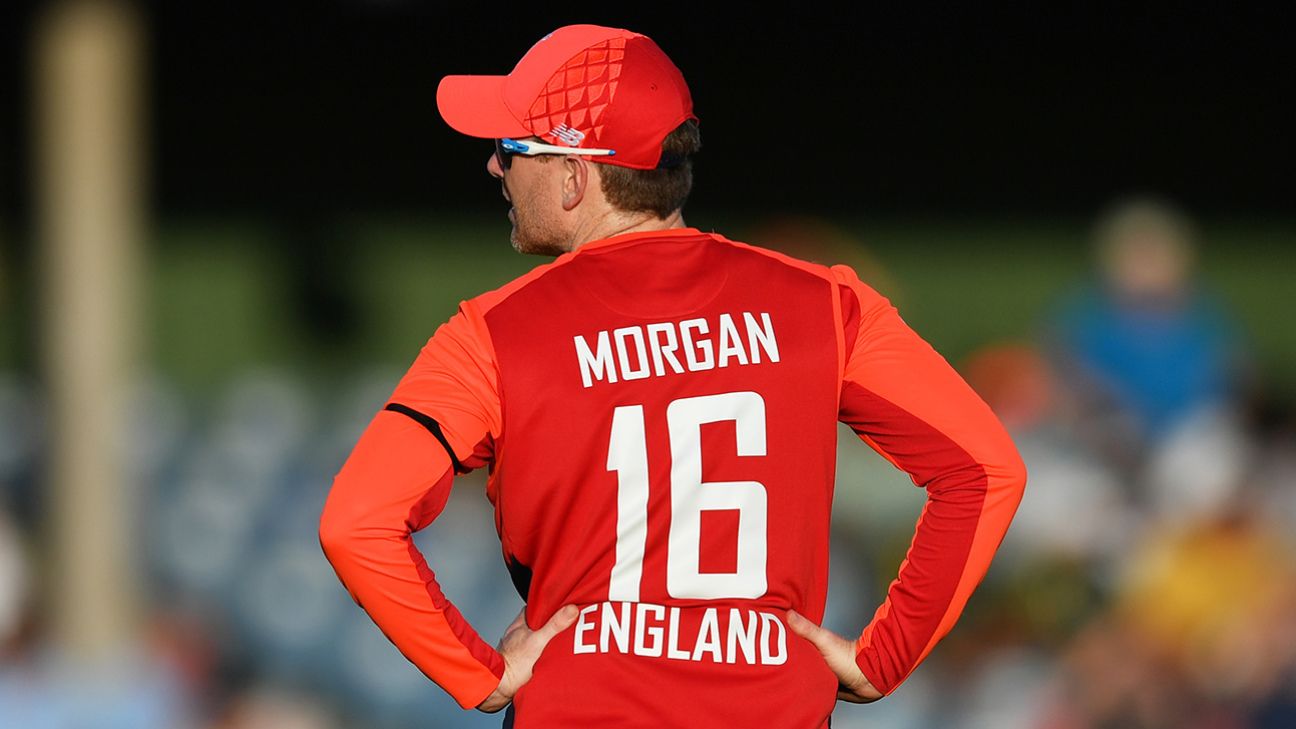